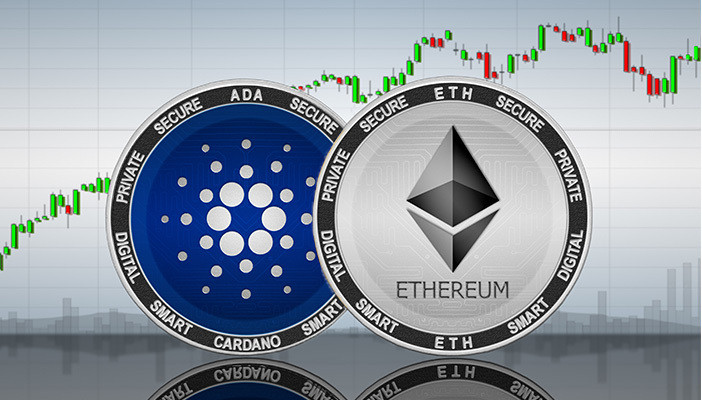 With their smart contract-compatible blockchains, both initiatives aim to power the future of finance. However, their teams are on quite different paths to this end goal, and both projects are now at a fork in the road. While Ethereum makes gradual progress toward a new sort of blockchain technology that some cryptocurrency experts believe may be the future of decentralized finance, upstart competitor Cardano is preparing to launch. Cardano's digital token, ADA, has soared this year in digital-asset markets in anticipation that the project's early adoption of a "proof-of-stake" blockchain will give it a leg up on the much-larger Ethereum network.

Both Ethereum and Cardano are on the verge of major upgrades in the next months, with enormous increases in use and development. By the end of 2021, we'll have a good idea of which of these two initiatives will take the crypto title of king of crypto. Cardano's goal, like Ethereum's, is to create a massive, decentralized computing network that millions of people, businesses, and governments will be able to use in the future to run financial applications from anywhere on the planet. While ether, the native token of the Ethereum blockchain, now holds a commanding lead in the battle, with a market valuation 13 times that of ADA, the smaller rival could be positioned to capture an increasing proportion of the fast-moving industry.

Why does Cardano have the potential to supplant Ethereum?

Cardano is one of the most popular cryptocurrencies with a long history. Its ADA currency is among the top ten most valuable cryptocurrencies by market capitalization. Since its inception in 2015, it has consistently ranked in the top ten. After Bitcoin, Ethereum, Binance Coin, XRP, and Tether, it is currently in sixth place. The value of Ethereum has risen dramatically in the last year as more high-profile clients join the platform. Ethereum is also the backbone of the non-fungible token (NFT) market, which has been flooded with NFTs this year, driving up the Ethereum price even higher. Ethereum also benefits from well-known decentralized finance (DeFi) projects based on its blockchain. Ethereum, on the other hand, is expensive to use and has a latency in transaction times. Due to its lightweight architecture, Cardano expects to outperform it on both counts.

This year, the price of ADA has increased by more than 120 percent, making it the second-best performer among digital assets with a market value of at least $1 billion. It has outperformed ether (ETH), the Ethereum network's native cryptocurrency, which has gained 80% year to date. In the year 2020, Bitcoin is up 31%.

The price of ADA has risen 16 percent in a month and 3,557 percent in a year. So, what is it that makes it so popular? There are three main causes behind this. One of the most important factors is that the product is generally available for trade. Cardano (ADA) was added to the Bloomberg Terminal in mid-March, and Coinbase began supporting it shortly after.

This has undoubtedly contributed to its increased popularity. It's also a highly liquid market, with a market size of over £40 million, and institutional investor interest is rapidly expanding.

Year-to-date, Ethereum is up 115 percent. ADA, on the other hand, is up 517 percent year to date. Cardano is a low-fee, safe, and trustworthy blockchain system. Its goal is to create a healthy, long-term ecosystem. As a result, Cardano's ADA is likely to remain a popular cryptocurrency, easily rivaling Ethereum, as long as this trend continues.

Cardano price forecasts are all the rage right now as investors look ahead after today's coin meltdown.

On Wednesday, ADA fell 21.7 percent in 24 hours. Despite this, it has risen 725.3 percent since the beginning of the year. Crypto has been on fire recently, with a crash affecting several of the industry's largest players. Cardano's value will rocket during the year, with the possibility of setting a new all-time high. By the end of 2021, ADA might be worth $10. The ADA would begin in 2022 at $12. If it focuses on certain developments and attracts more investors, the price might hit new heights. By the end of 2022, Cardano might be worth almost $22.

So the bottom line is that predicting the cryptocurrency price is one of the most challenging tasks due to the market's volatility. Consider the opinions of famous media and individuals on the Cardano price prediction, which will provide us with a more accurate picture.